So it seems there is yet another piece of ransomware in the wild which is more sophisticated than Wannacry as it uses multiple attack vectors. I have read that one of these is once a machine is infected that it uses the great SysInternals utility psexec.exe, and possibly Microsoft’s command line WMI utility wmic.exe, to spread further. Whilst there are products, like Ivanti Application Control, formerly AppSense Application Manager, that can be used to blacklist these, if you haven’t got those products today then you need a way of stopping these attack vectors. One way would obviously be to delete wmic.exe, or remove NTFS permissions to it, but you can’t do that for psexec since presumably the malware is either downloading it or has it embedded within its payload.

Here is where we can use the little known Image File Execution Options (IFEO) registry key to put a temporary, or permanent, block on these, or any other executables, so they cannot run. We can either get them to fail silently or run a script informing the users that their machine is infected.

IFEO has been around for 20+ years – in fact the very first version of the software that I wrote that became AppSense Application Manager used this feature. It is great for debugging but is also an attack vector itself for malware as it can be used to disable security programs with the same technique. One mitigating factor is that because the key is in HKLM, you need administrative rights to write to it and we don’t let any user run with administrative rights when they are running web browsers, email, Office products, etc. now do we?

So what do I do? In its simplest form, create the key “psexec.exe” in “HKEY_LOCAL_MACHINE\SOFTWARE\Microsoft\Windows NT\CurrentVersion\Image File Execution Options” and then create a REG_SZ value called “Debugger” and set it to “svchost.exe” as below:

Job done! If you run psexec.exe before adding the above settings you’ll see something like this:

But once the registry key and value are in place we get this instead:

Attack vector thwarted! But aren’t we then running a service because svchost.exe is being run instead? No, service executables can’t just be run from the command line, they need to be invoked via the Service Control Manager (SCM), so this invocation of svchost.exe just fails silently.

Do the same with a wmic.exe key and that’s both supposed attack vectors blocked for now.

You can also set the value to run a script although you need to ensure that the script itself cannot be compromised using file system security. For instance, if I set the Debugger value to this:

Note the use of the full path so we don’t accidentally run a malicious powershell.exe (unless your whole system is compromise!) and if using PowerShell rather than cmd.exe ensure that your PowerShell execution policy allows the script to run.

My c:\temp\infected.ps1 script contains just  this:

then when psexec is run a user will get this popup: 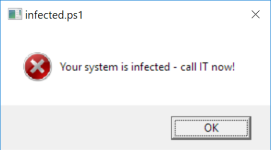 How do I roll this out quickly in an enterprise? Unless you’ve already got something that can push out registry settings to multiple computers then I would suggest that Group Policy Preferences is one of the easiest ways of achieving this.

When your security software is up to date then you might want to delete the key/value unless you need to run psexec.exe for other reasons (it is a great tool and I hope it isn’t blocked by anti-virus software in the future).

It may also be worth changing the permissions on the sethc.exe (and wmic.exe) keys you create such that they are read-only to everyone, admins included, just in case further malware tries to target these keys. In fact, why not protect the whole IFEO key, particularly if you are letting people logon with administrative rights?

I  hope this helps and stay safe people!

I wrote my first program, in BASIC, in 1980, was a Unix developer after graduation from Manchester University (Computer Science) and then became a consultant, initially with Citrix WinFrame, in 1995 and later into Terminal Server/Services and thence EUC. I currently hold the Citrix CTP, Microsoft MVP, VMware vExpert and Parallels VIPP awards. I invented and wrote the first few versions of the security product which is now Ivanti Application Control (formerly AppSense Application Manager). I now work as an freelance consultant-cum-developer, live in West Yorkshire, England; have a wife, three children, one grandchild and two dogs and was a keen competitive runner until health problems put an end to that fun. View all posts by guyrleech

This site uses Akismet to reduce spam. Learn how your comment data is processed.